As currents events continue to unfold, many of us are coming across terms that we don’t understand.  In today’s post, we are going to look at the magic of rehypothecation and how this leading to an incredibly tenuous situation that we are seeing within the US economy.

If all of this sounds somewhat familiar, this is very much part of the issues that caused the 2008 financial crisis as mortgage backed securities (MBS) were used as collateral to essentially, get money now for banks.  Rehypothecation was a common practice until 2007, but hedge funds became much more wary about it in the wake of the Lehman Brothers collapse and subsequent credit crunch in 2008-09. In the United States, rehypothecation of collateral by broker-dealers is limited to 140% of the loan amount to a client, under Rule 15c3-3 of the SEC.  In the past, Lehman would go to a bank and ask for cash. The bank would ask for collateral in return and Lehman would offer mortgage backed securities (MBS).  Lehman gave their collateral to the bank and recorded these loans as sales instead of payables, with no intention of buying them back. This EXTREMELY overstated their revenue. When the market started realizing how bad these “AAA” securities actually were, they were no longer accepted as collateral for repo loans. We all know what happened next.

Rehypothecation happens if a customer leaves a number of securities with a broker as a deposit, most often in a margin account, and the broker then uses the securities as a pledge for the margin on his own margin account or as backing for a loan.

Hypothecation occurs when a borrower promises the right to an asset as a form of collateral in exchange for funds. One common example occurs in the primary housing market, where a borrower uses the home he is purchasing as collateral for a mortgage loan.

Even though the borrower asserts a level of ownership over the property, the lender can seize the asset if payments are not made as required. Similar situations occur in other collateralized loans, such as a vehicle loan, as well as with the setup of margin accounts to support other trading actions.

So what does this have to do with current events?

Repos and reverse repos are the LIFEBLOOD of global financial liquidity. They allow for SUPER FAST conversions from securities to cash.  The NY Fed, alone, submitted $40.354 BILLION for repo agreements on (3/29). This amount represents the ONE DAY REPO due on 3/30. It’s probably not a surprise that back in 2008 the go-to choice of collateral for repo agreements was mortgage backed securities..

The interest rate in 2008 on repos started climbing as the cost of borrowing money went through the roof. This happens because the collateral is no longer attractive compared to cash.  Remember how the Fed stepped in for Fannie & Freddie with over $190 billion in bailouts. 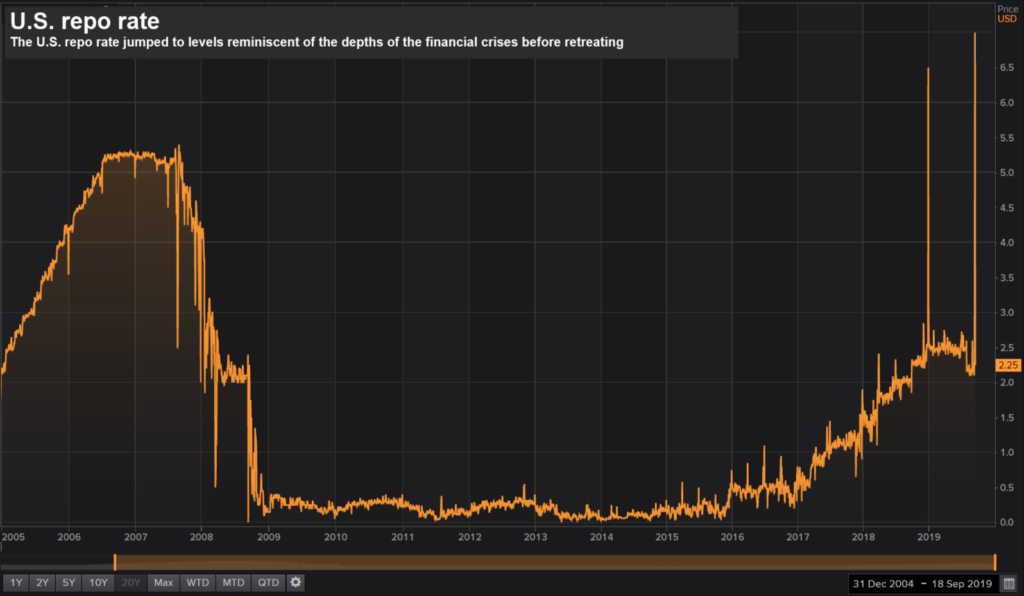 A few years later, MF Global would suffer the same fate when their European repo exposure triggered a massive margin call. Their foreign exposure to repo agreements was nearly 4.5x their total equity.. Both Lehman and MF Global found themselves in a major liquidity conundrum and were forced into bankruptcy. Not to mention the other losses that were incurred by other financial institutions… check this list for bailout totals. 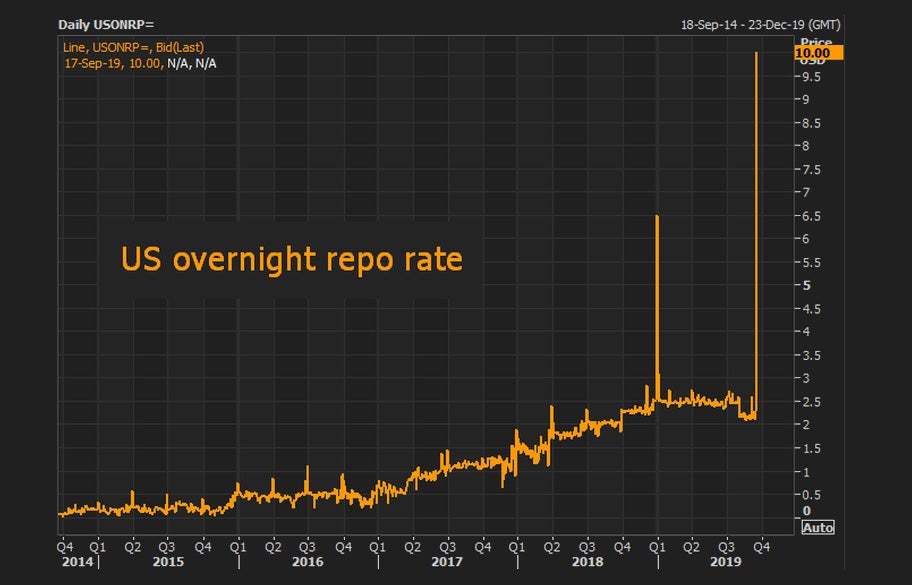 We saw a 10% spike overnight.  The reason for the spike was once again due to a lack of liquidity. The federal reserve stated there were two main catalysts (click the link): both of which removed the necessary funds that would have fueled the repo market the following day. Basically, their checking account was empty and their utility bill bounced.  There was another huge infusion of cash required to prevent the whole system from collapsing.  And without MBS, they went to the next best thing, Treasury Bonds.

The US government sells you a treasury bond for $1,000 and promises to pay you interest depending on how long you hold it. Might be 1%, might be 3%; might be 3 months, might be 10 years. Regardless, the point is that purchasing the US Treasury bond, in conjunction with mortgage backed securities, allowed the fed to keep pumping unlimited liquid money into the repo market. 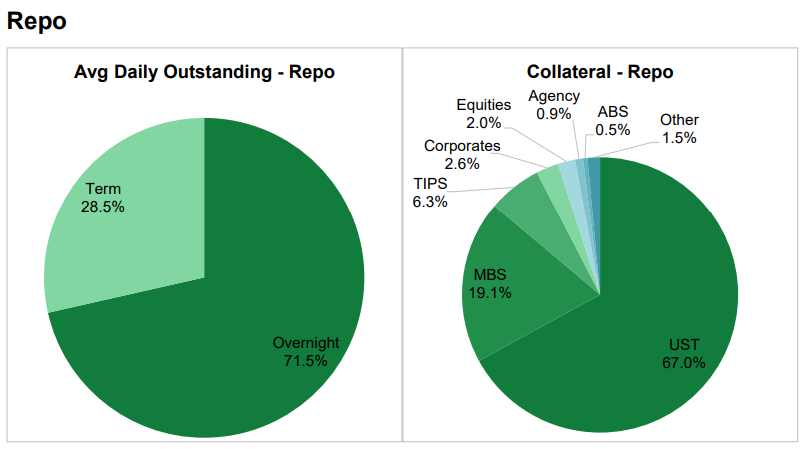 At this point, just know that the US Treasury has replaced the MBS as the dominant source of liquidity in the repo market.

Coincidentally, this is also the main source of collateral that hedge funds and others are using.  In all, it is essentially a house of cards using the magic of rehypothecation.

If this post scares you, make sure to set up a FREE consultation meeting with us so we can figure out how to protect your assets.  Click here.