So the Fed had a closed door meeting in June, and as Jerome Powell gave his presser almost all of the questions mentioned the word “inflation.”  Main street media is openly talking about inflation now.

During the presser, Burry tweeted this: 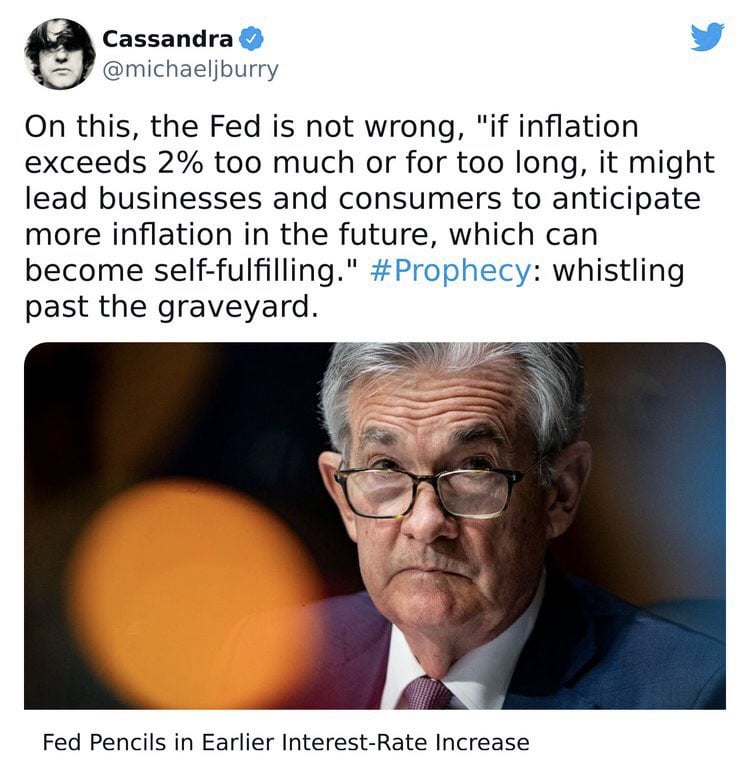 Here is the definition of “whistling past the graveyard.”

Definition of whistle past the graveyard

informal: to act or talk as if one is relaxed and not afraid when one is actually afraid or nervous.

He shows a confident manner, but he may just be whistling past the graveyard.

Burry has made it clear in the past that he thinks inflation is a very real worry for the U.S. And I would have to agree with his assessment about the Fed’s presser. Powell talks a good game, but if you watch him closely while he speaks you can see he is very nervous about something. In one sentence Powell says they are very confident inflation will remain anchored around 2%; the next he says he has “no idea” where the U.S. economy will be in two years. At one point, a reporter said point-blank: “so it sounds like you think next year will be a down year for the economy, with inflation.” And Powell responded by saying “well, it will be a year with less fiscal support.”

The Ascent of Inflation

Like I mentioned, this is not the first time Burry has talked about inflation. He had an extensive series of tweets back in February about the subject which I found fascinating. You might find value in reading it all too, kindly preserved by the Burry archive Twitter account.

Today I am looking at three main tweets from that chain, shown in these two pictures below: 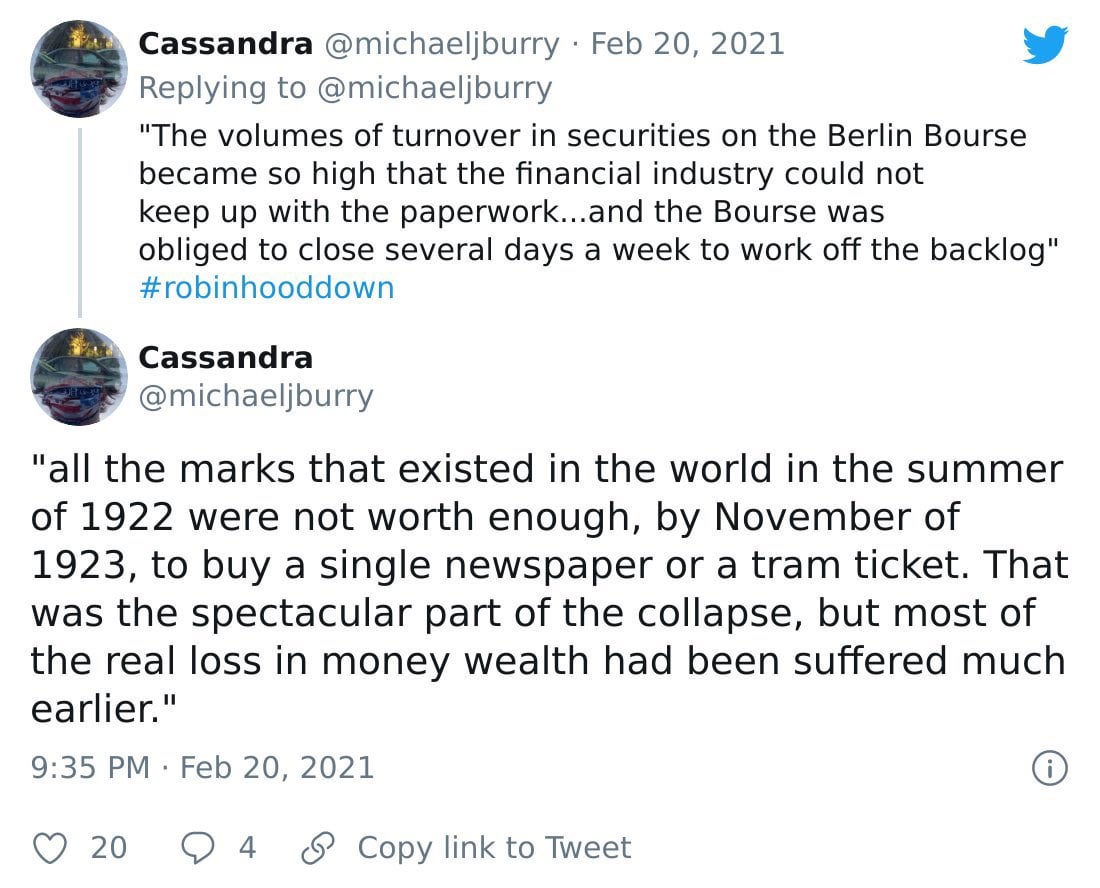 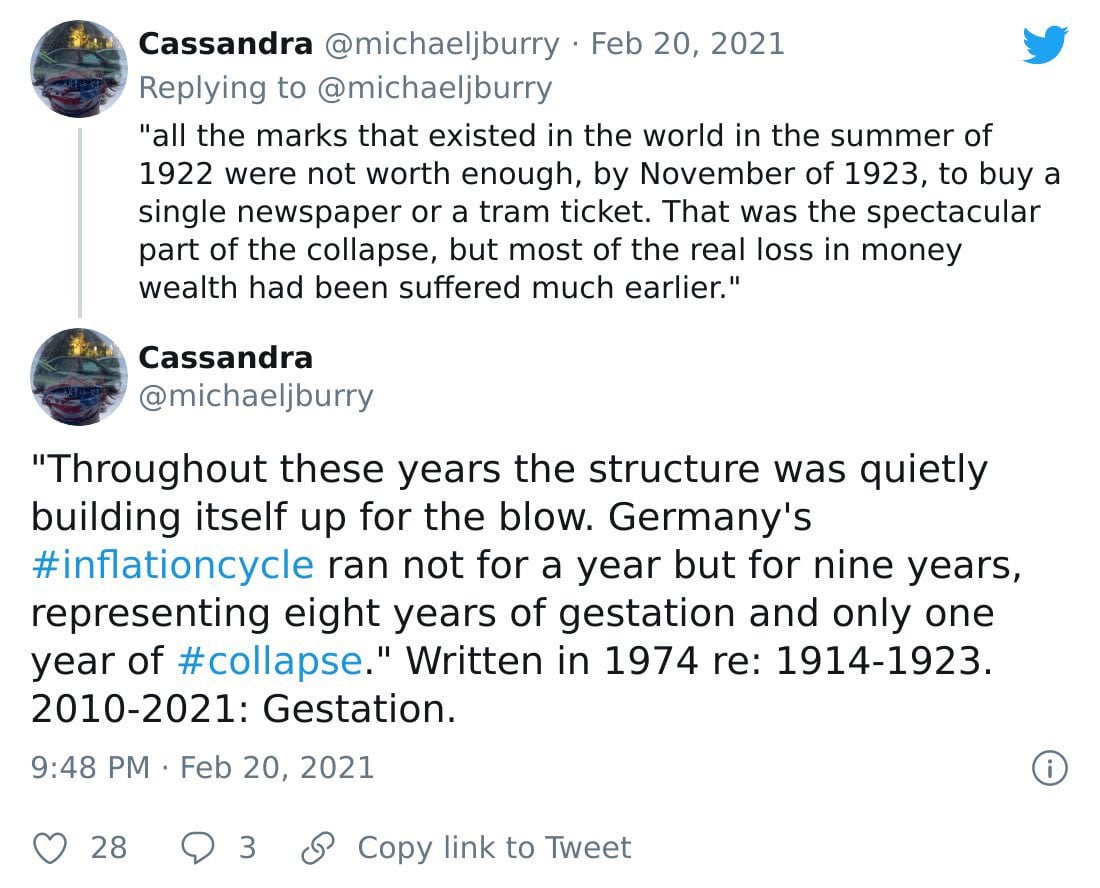 Burry is quoting extensively here from a book about the German hyperinflation during the Weimar Republic, just after World War I. The book is Jens O. Parsson’s “Dying of Money: Lessons of the Great German and American Inflations.” I read parts of that book, and it has quite a few things to say that I think are very valuable for us.

Parsson describes what he calls the “ascent” of the hyperinflation of Germany with a few key identifying factors. The graphic below spells it out.

Now, there are notable overlaps with our current situation but I want to be clear that it is not a perfect overlap. Just to go over it briefly, here are my thoughts on the stages listed above.

A Look Under the Hood

There are any number of technical indicators we could look at to try and measure inflation. For the sake of simplicity I will focus on just a few here, but the results are no less drastic. First, let’s take a look at M1. M1 is the measure of the amount of liquid money in the economy at a given time. When there is an excess of money, as in the case of inflation, it has to go somewhere, right?

A second indicator we can look at is the velocity of money, or how fast money is moving through the economy. One way to think of this is the ratio of money to the GDP. Maybe a simpler way to look at it as the demand for money, or the rate at which money is used for transactions. And–

Ok, one last chart, I promise. This is the reverse repo facility usage. 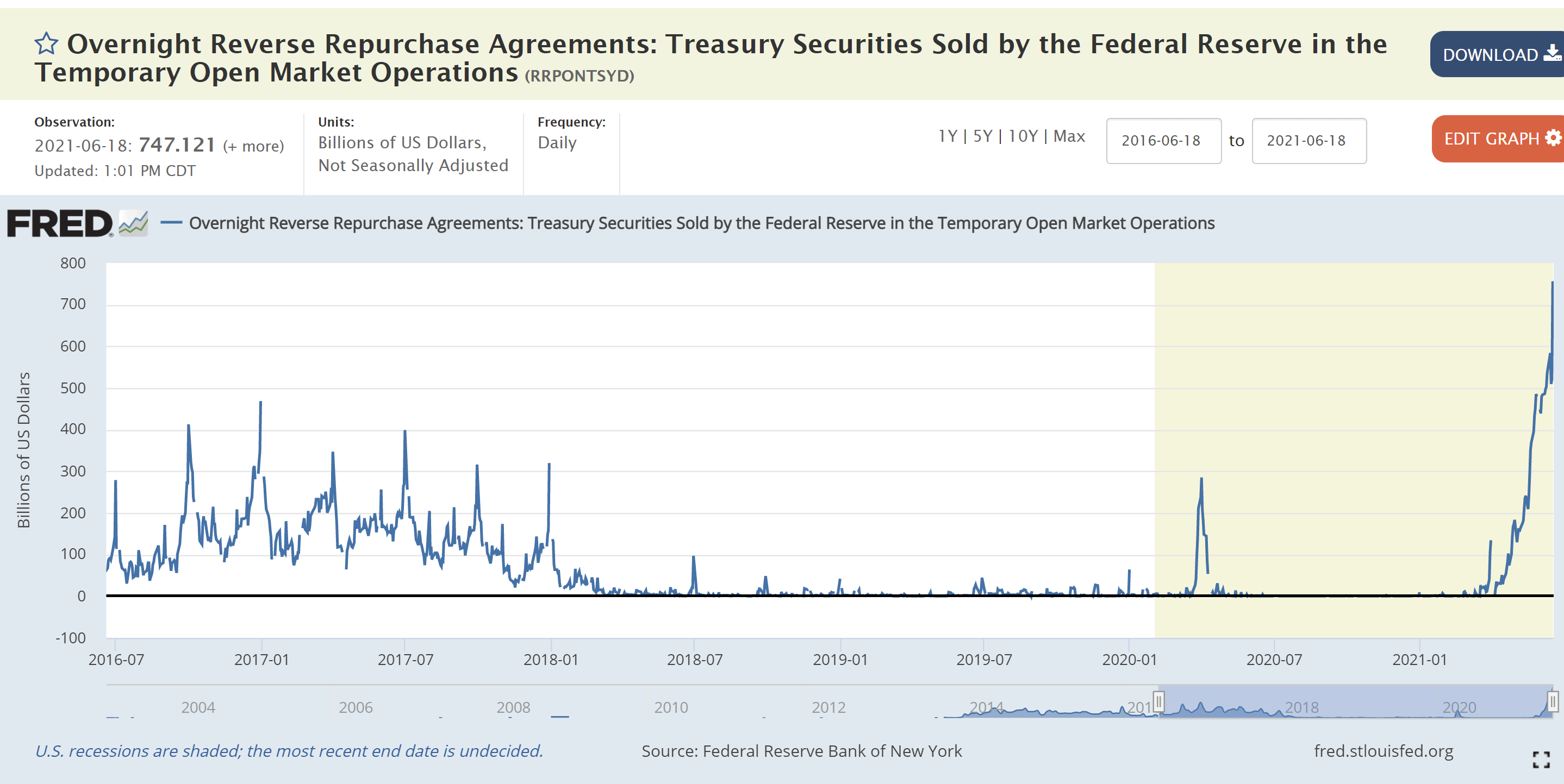 You have no doubt heard a lot about this over the last week, as we are on quite a streak for new records set each night with reverse repo usage. The reverse repo facility is a “facility” where large institutions can “park” money that they have liquid to keep it inflation proof. Having too much cash on hand is a liability, especially in an inflationary environment after all. And these big banks are “parking” their money overnight at the facility because they don’t have any other investments that they think can beat the Fed’s promised 0.05% interest rate offer. Think about that for a moment. And I should mention too: the 0.05% interest rate was an announced increase as part of the Fed’s presser yesterday. The Fed isn’t slowing down the money printer — they are turning it up.

My main takeaways from this exercise:

In all, nothing good being revealed here but good learnings for us all from an inflation expert in Michael Burry.  If you want to figure out your plan for future inflation, set up a FREE consultation with us here: