There is a famous saying by Edmund Burke (1729-1797), “Those who don’t know history are destined to repeat it.” In a similar vein, we have another quote from George Santayana (1863-1952), “Those who cannot remember the past are condemned to repeat it.”  These two sayings are the basis for this post as we consider whether we are seeing history repeating itself.

We start with some research on cyclical events. It is commonly said that every 10-12 years our economy goes through a correction, and I have found that every 100 years there is a financial crisis in the 20’s or 30’s!

Admittedly, there are many recessions and events that happen in between all of these events, but these were some of the BIGGEST ones during those times.  And these events were also proof that we often see history repeating itself.

If we look at each of the historical charts of the major indices (DOW, NASDAQ, S&P 500), we can see the various depressions/recessions that have occurred since each were incepted. We can clearly see the Great Depression (1929), 1973-75 recession, 1987 crash (not marked as a recession/crisis), the 1990 recession caused by trying to reduce inflation, the dot com bubble (2000-2001), the Great Recession (2008-2009), and what we are sitting in now (whatever they decide to call it starting February 2020). Each of the three historical graphs will show these in their own way (minus the Great Depression on the Nasdaq because it was not around yet!)

As we dive deeper into the charts, we can also begin to see patterns leading up to crashes/corrections.  For example in the below chart, we can see the NASDAQ vs DOW JONES since 1971 (Orange is NASDAQ | Blue is DOW JONES).  Link here. 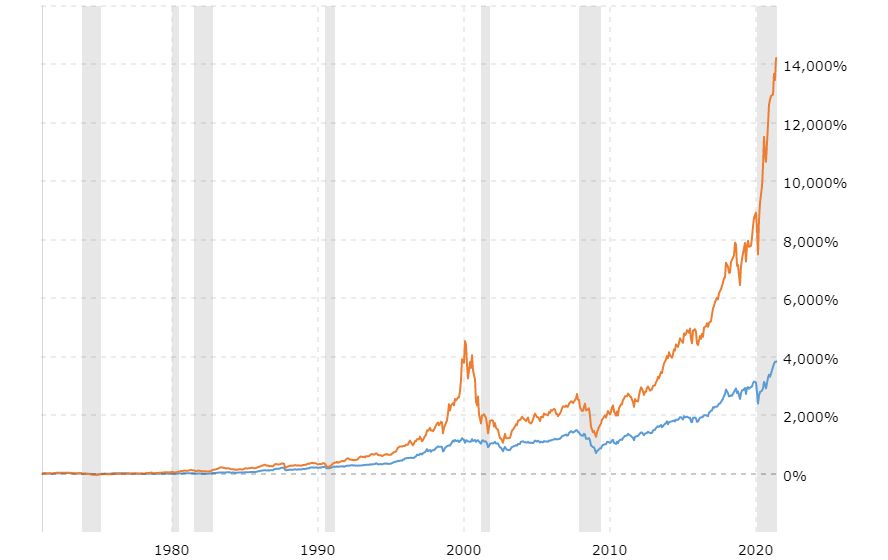 We can see the dot com bubble spike in the early 2000s.  We can also see an even bigger divergence later on in the chart that we will discuss next.  We can look to another article to help figure out what the wide divergence between the Dow Jones and Nasdaq can possibly mean:

“It’s not a good sign that wide divergences between the Dow Jones Industrial Average and the Nasdaq Composite Index have become almost commonplace.

Consider the number of trading sessions in which there is at least one percentage point spread between the returns of these two indices. We’ve experienced two such days just this week alone. On Tuesday, the Nasdaq rose 1.1% while the Dow fell 0.2%. In Wednesday’s session the mirror opposite occurred, with the Nasdaq falling 1.0% and the Dow rising 0.2%.

Such broad divergences historically have been quite rare. Since the Nasdaq Composite was created in the early 1970s, just 12.8% of the trading days experienced such a wide divergence as investors experienced this week. So far this year, in fact, the proportion of these 1.0%-plus divergences has been 34% — almost three times greater. As you can see from the chart below, this year’s percentage is the highest on record except for the years associated with the internet bubble.” – Mark Hulbert

However, this is just one comparison of indices.  Make sure to come back and read our next post as we look at other indices and metrics to figure out whether if we are seeing history repeating itself.