The editor-in-chief of state-backed Chinese newspaper Global Times warned debt-ridden property giant Evergrande Group that it should not bet on a government bailout on the assumption that it is “too big to fail”.  It was the first commentary to appear in state-backed media casting doubt on a government bailout for the country’s No.2 property developer.  Evergrande is scrambling to raise funds to pay its many lenders and suppliers and investors, with regulators warning its $305 billion of liabilities could spark broader risks to the country’s financial system if not stabilized.  Adam Cochran (https://twitter.com/adamscochran) has summarized why the Evergrande scam could be a catalyst for a market crash.  Here are the main points below.

– Evergande and other Chinese developers stocks dropping off a cliff in the HK morning session today. Here is what you need to know about why Chinese Real Estate may impact crypto and even US markets.

– Evergande ($3333.HK) is a major Chinese real estate developer, who through leveraged properties and issuing US denominated junk bonds, built up a real estate empire making it the second biggest in the country.

– Assets and equity boomed over the past decade, but net income struggled. The reason is debated, but it seems they were over leveraging properties that were getting very little actual revenue to grow their empire.

– This worked, right up until the pandemic really began to hurt the few commercial and tourism properties that were actually driving revenue for them. It’s estimated that they’ve now managed to rack up more than $300B USD in debt.

– To put that in perspective $300B USD is the entire GDP of countries like Ireland, Denmark, Hong Kong or Portugal. And that is just the *DEBT* that Evergrande has.

– Currently rumors are swirling that Evergrande may not even have enough remaining capital to service the interest payments on their loans nevermind paying down their principals.

– Now, the real estate developer claims they are going to liquidate property to get ‘operations back on track’ But, those of us in the crypto market understands how liquidations work.

– If you are a liquidating because your collateral asset (real estate property) has sunk in value, and you have to sell that asset to pay back, then every time you sell it, the asset drops further.

– Evergrande is so large they will be in a race to the bottom as they’ll be selling properties which will lower the average price of properties in the region, thus lowering their asset value and entering into a spiral. 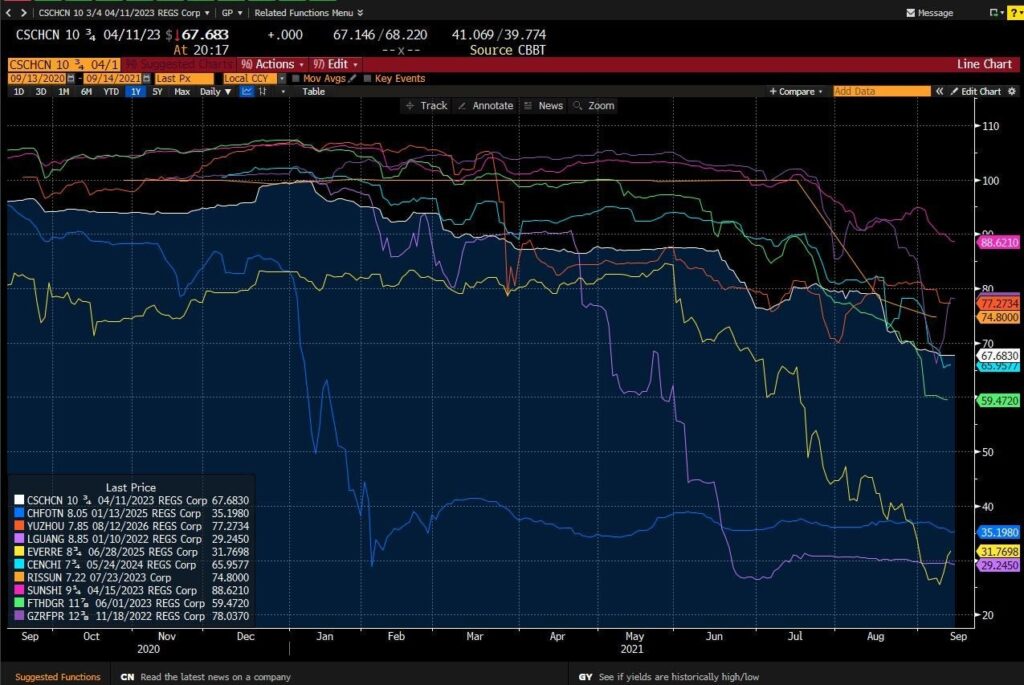 – Now creditors are unwilling to accept their bonds and demanding payments made and aggressive restructuring options are being reviewed.

– So why should you care? On September 15, 2008, Lehman Brothers collapsed dissolving $600B in US assets leading us to the worst market crash since the great depression. $600B in assets.

– Right now, Evergrande has $200B~ in assets, and $300B in unserviced debt. $500B total. So its entirely on the same level as the assets that Lehman Brothers had.

– But, Lehman Brothers was a US bank broadly diversified across many industries. Evergrande is not. Evergrande is in one industry and only one industry. And its debt is held by banks across China, the US, Canada, UK, Australia and others.

– This also comes at a time when markets have been on an artificial, inflation driven, quantitative easing fueled run up like no other. So when the hammer does drop, it will drop hard.

– But, this will not only cause defaults on bonds, but it will mean billions of dollars unpaid to Chinese contractors and goods suppliers, and it will mean the largest ever bulk real estate liquidation ever if Evergrande goes under.

– That real estate collapse would mean the asset sheets of other real estate developers, banks and mortgage companies in China would all crumble. Remember the big empty houses in the US in 2008? That times 100x.

– Then we have to remember that China owns 15% of all global debt, so what happens when they have an internal crisis? They are likely to start aggressively pursuing some of that external debt.

– Which much of is likely with the same overseas banks and funds that own Evergrande bonds in the first lace.

– Now, there is a chance that the CCP step in and find a way to bail out or unwind Evergrande. With China’s internal policies, it seems quite likely, although it will still likely be a pennies on the dollar bail out.

– But, if they don’t then market conditions are primed for a god damn meltdown. We’re sitting on a powder keg of weak economic involvement and yet all time high stocks, huge inflation and disconnected markets.

– The question of a large correction is not a matter of if, it is a matter of when, and how bad. That correction could be soon, it could be years from now, but it will happen.

– The longer it takes the worse it gets, but there are unique events that could make it far, far worse and the collapse of Evergrande is certainly one of them.

– These shockwaves would be felt in markets around the world.  Either way Evergrande is a HUGE story that most Western media is entirely oblivious too. I hope they get to stay that way and never have a reason to learn their name. But there is a chance that we’re currently staring down the barrel of the next financial meltdown.

– It all comes down to what the Chinese government will do, and if the Chinese real estate market actually has enough demand to keep these assets a float. But it’s yet to be seen if the Evergrande scam will cause a global market downturn.

Set up a FREE consult with us here so we can figure out if YOU are impacted by this development.  Click here.